The Continued Adventures of a Packet Radioist

WOW I HAVE SO MANY RADIO THINGS TO TALK ABOUT!

There’s been lots rolling about inside my head recently, mostly related to radio. I’m doing lots of wee things in the exciting world of amateur radio to fill my time as summer hits. I’m focussing mostly on packet radio and digital modes, and have done various vaguely interesting things over the last month or two.

This is a thing that happened with Iain / 2M0STB in mid march. Using our testbed setup of a Yaesu FT-7900 and FT-817, we invoked the magic of soundcard modems (Direwolf and Soundmodem) to make the magic of modern networking happen over a 1200 baud AFSK link.

We tried lots with Direwolf but just couldn’t get it to do the business. Soundmodem with MKISS worked straight away, however, and was easy & quick to deal with. Rather impressed.

The proof was receiving a picture of Iain’s cat embedded in a web page on his machine - 36.6KB/s took some amount of time, but it did work.

Maybe we’ll give it another bash so I can remember the process fully and write it up.

I’ve become somewhat tired of regularly using soundcard TNCs - it’s a bit of a fiddle, I don’t trust them and the required hardware is big. As part of my ongoing plans for world domination, I’d quite like my packet radio equipment to be small and work nicely out the box. To facilitate this, I got myself a TNC-Pi from Coastal Chipworks. This is a nicely laid out board and a quick kit to build - it took me about 90 minutes on an afternoon: 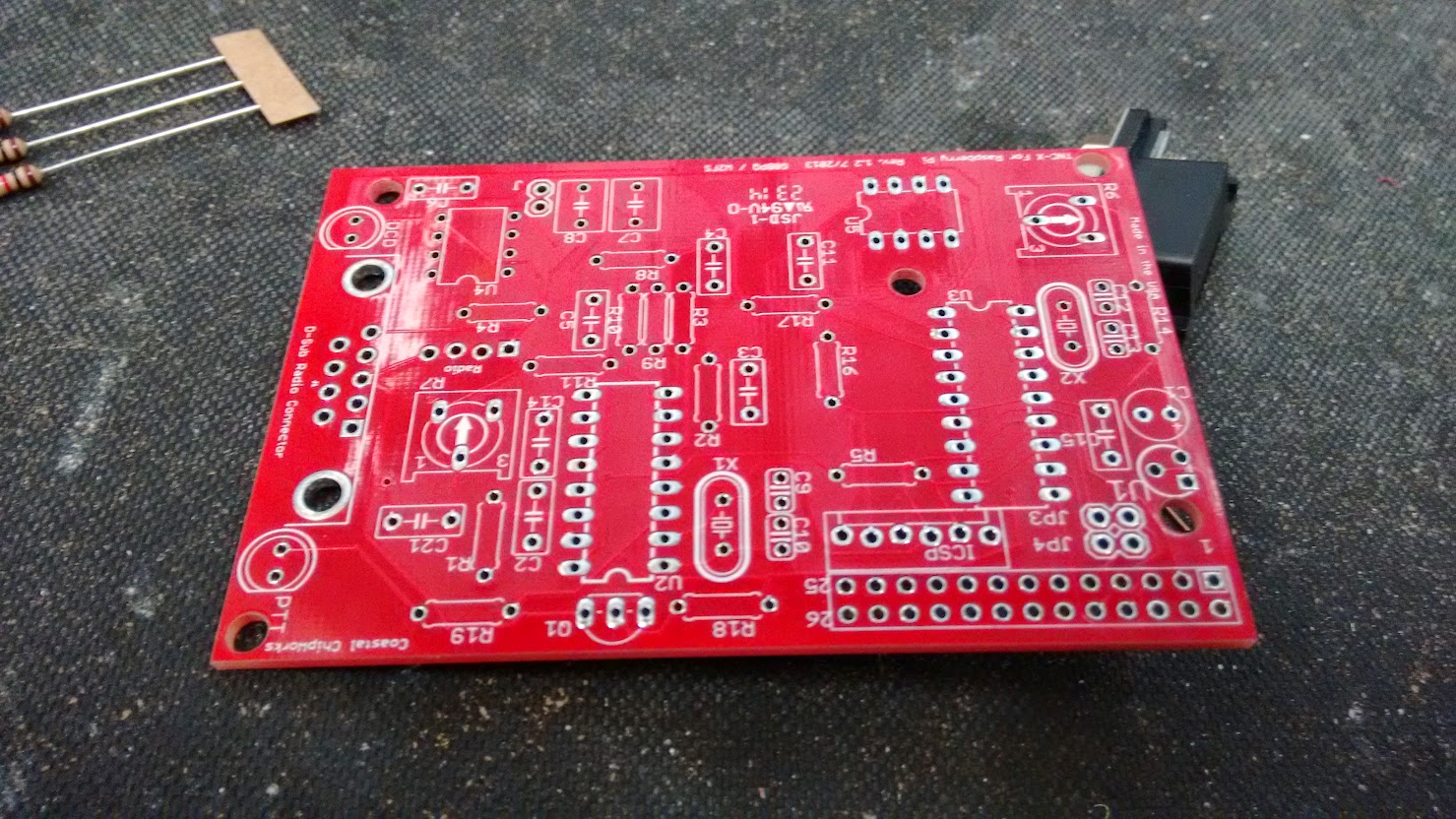 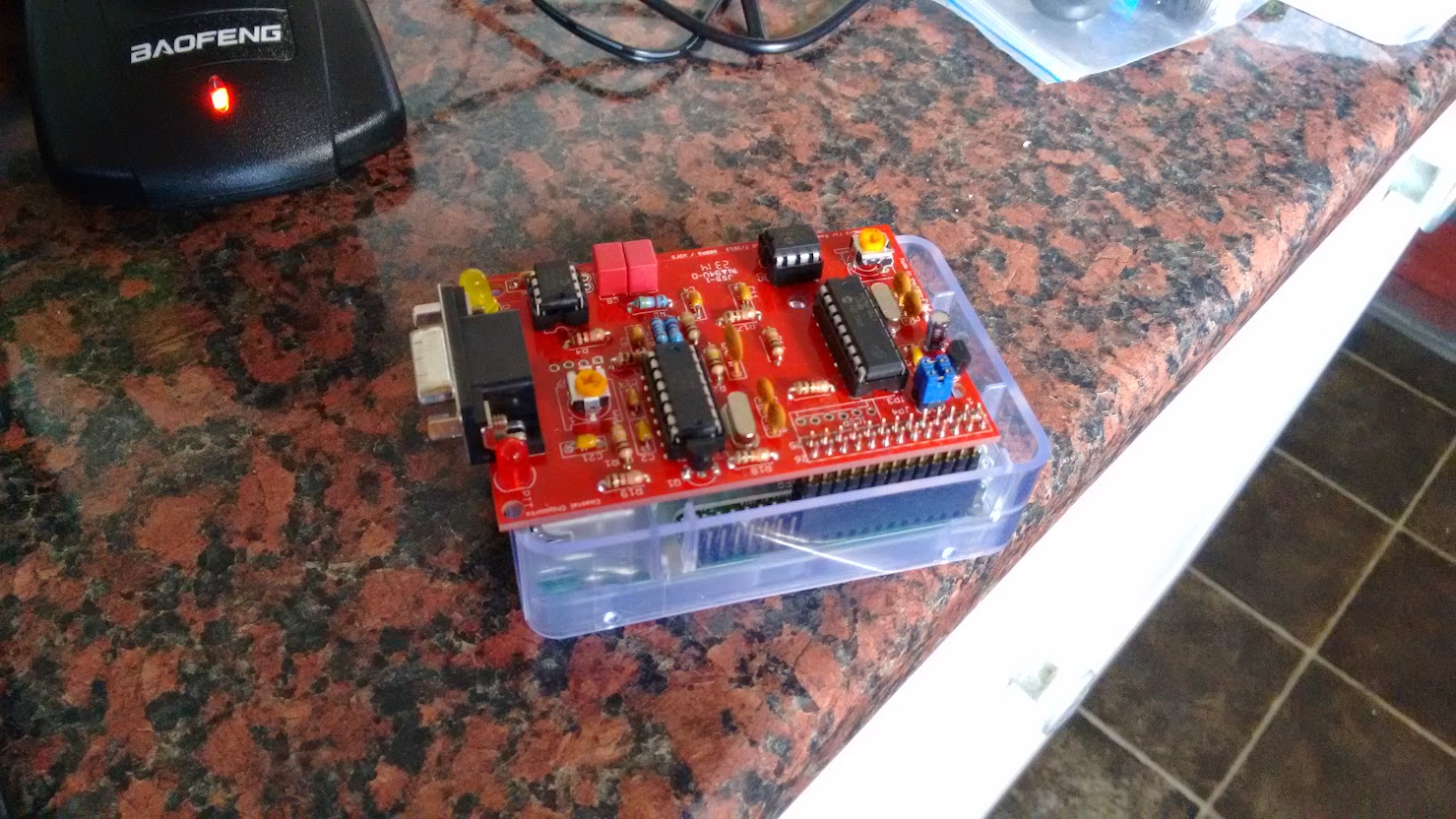 I’m really impressed with the hardware - all I need to do is kissattach and it’s there, ready to be used.

In reality, what’s happening is I’m using the excellent tnc-server to listen for connections over the network, and remserial to present it as a serial device locally, as is described in the ‘Using with Xastir’ section of the readme.

This has seen extensive use locally for APRS, and I’m going to start trying the IP experiments with it again soon.

I’m properly impressed - you should go look at getting one, or the TNC-Pi 2, for Raspi 2 and B+.

It’s safe to say at the moment I’m all about the RFD. It’s a fantastic design that I’ve fallen in love with for most VHF applications. I’ve got one at home and on my bicycle mobile setup (more on that later).

I was first introduced to this some time ago as the Half Wave Flowerpot Antenna by VK2ZOI. Since then, I’ve connected the dots and worked out what it’s actually called and how it works. It’s a really fascinating design that, at VHF and paired with either the FT-817 or a Baofeng type handheld has been really impressing me. There isn’t enough documentation on the internet connecting the Flowerpot name to the Resonant Feedline Dipole, so I’m probably going to properly write up the mode of operation and design notes for other frequencies - we’re soon to try 70cm up here in the frozen north, so it’ll get modified for that.

N5ESE has a fantastic resource for this on his website which is well worth investigating if you want to understand how this works.

For me, a reasonable Bicycle Mobile setup has been the holy grail for a while. I’m not wholly sure why, but it seems cool so I’m running with it. Now that there’s an NoV granted for the local APRS digipeter, I’ve been working more on this concept.

I managed to get a Foxtrak from Paul M0TZO however so far I’ve not had any luck in getting this to work. I’ve bought some new PICs to try and build “freely available” software that lives on George Smart, M1GEO’s excellent wiki to get some life out it. The long and short of the process, though, is “fuck PICs”. I’ve never really engaged with that ecosystem and I’m not starting to do it properly now - programming hardware is hard to come by and somewhat expensive compared to all the AVR and other stuff that I’ve got.

Until then, I’m playing with Trackuino, intended for high altitude balloons, but it’s built for my arduino nano nicely.

The idea for this is GPS -> Arduino -> Radio -> Igate for GPS tracking my cycles on aprs.fi, as well as capturing the packets and keeping them for my own nefarious plans (heatmaps, other stuff). If I can get this working, EVERYTHING is going to be APRS’d. Car, bike, uhm… all the other stuff I regularly travel in.

The antenna has been dubbed my flagtenna - I got a cheap flag from ebay and cable tied it to my rack, mounting an RFD on it. It looks nothing short of fabulous: 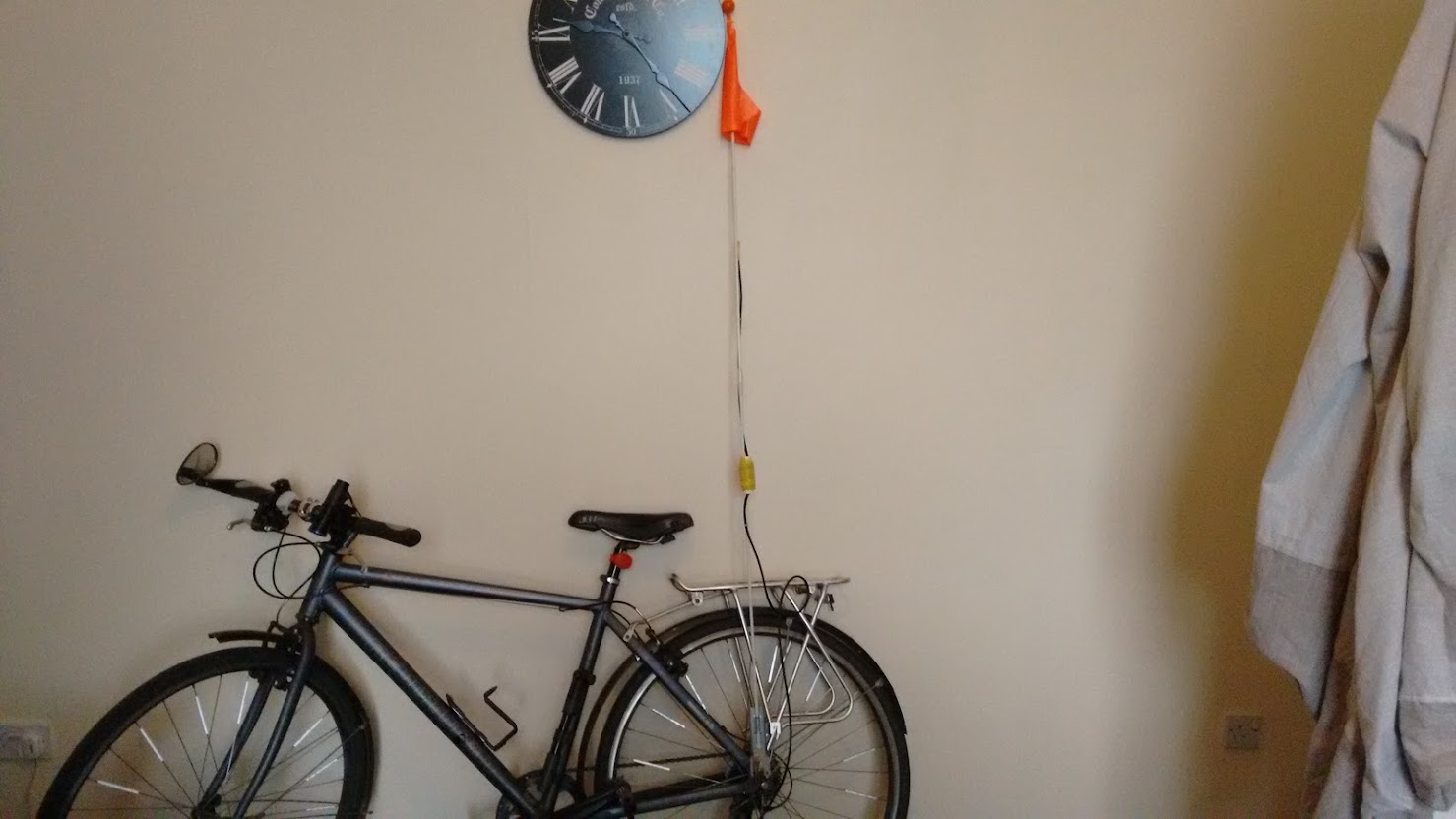 I stand out for all the right reasons, as ever. Antenna performance is phenomenal. In the current good weather, I can do GB3GN and most of the city nicely from my QTH, and out on the move near the University I got into GB3NG easily on 5w, which is pretty impressive. I look forward to more extensive soak tests over summer!

I think that’s most of it for now. There’s other stuff I’m up to but it’s still rolling around in my head. Proper Baofeng soundcard interfaces, for one, and other weird bits and bobs.

They’ll fall out my head soon enough, no doubt.