Radio Power in the Field

I have an amount of portable, HF radio equipment that I don’t use enough. One reason is just how awkward and cumbersome it can be to move everything around. I would like to have a small bag/box I can attach to a backpack or my bike before I go out. Powering things in the field is a significant part of that problem.

I’ve spent some time thinking about a solution, and here’s the extent of my work so far!

I have a Yaesu FT-100D, a radio that can output 100W of RF on HF SSB. I am not licensed to use that much power, but it doesn’t mean the radio can’t.

Previously I’ve used a Yuasa motorcycle battery with about 3Ah of capacity to serve this role but it’s heavy (1.3Kg) and quite large (0.54l) for a portable set up, and has now lived out its life with not a lot of use overall.

I’ve been looking at a few technologies - LiFePO4, LiION, NiCad and more. I’ve come to the conclusion that the for flexibility and repurpose-ability I want, LiION 18650 cells are probably my best bet. They’ve really been brought down in price by the explosion of vaping, which is quite helpful for me!

I picked up some Samsung 35E cells, which have a handy datasheet and have been extensively tested

They can comfortably sustain 8A out, with a burst to 13A, and have a reasonable capacity of 3500mAh. 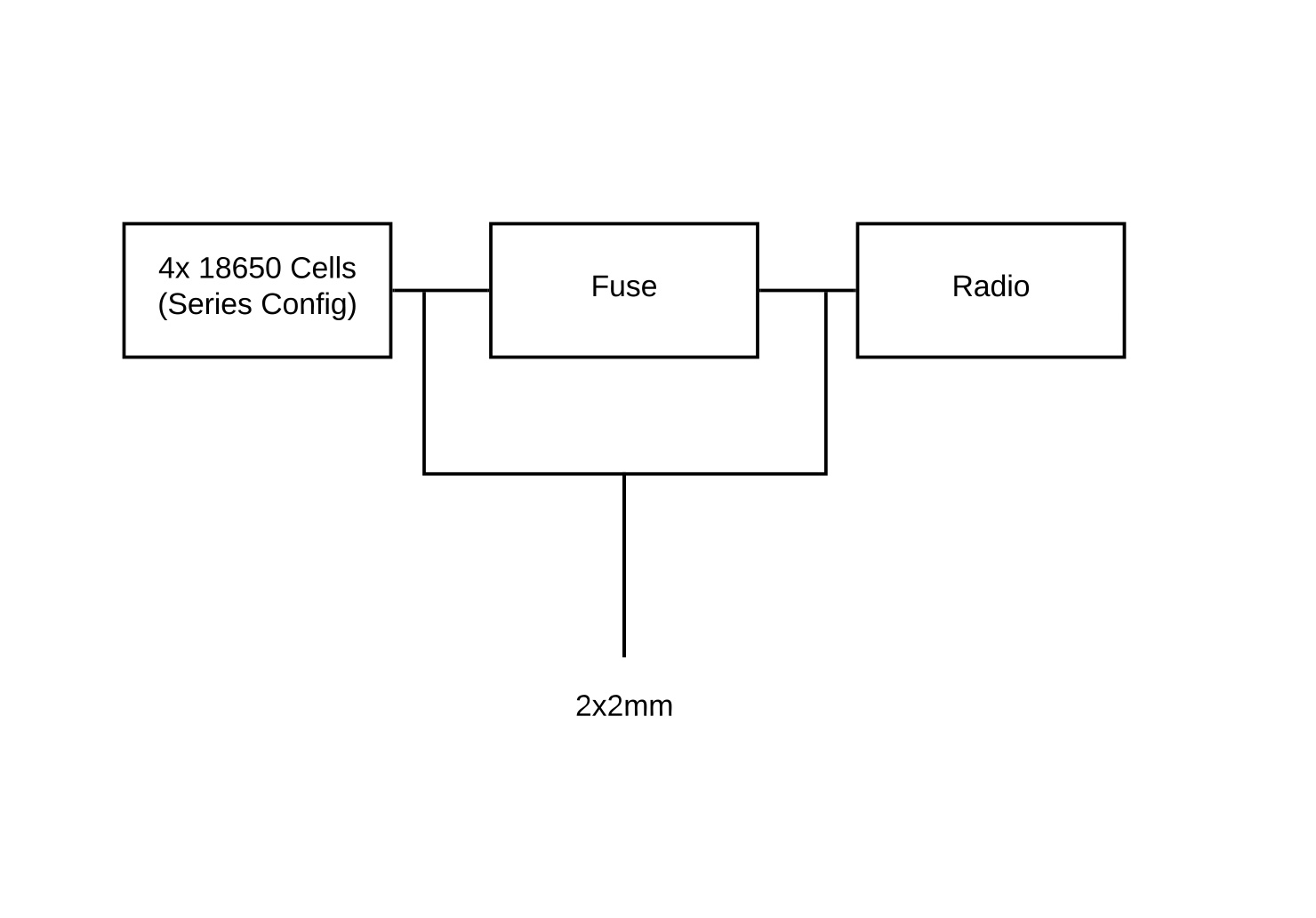 The original idea was to connect the batteries directly to the radio, but their fully charged voltage is measurable at ~16.8V when connected as 4 in series, which is way above the radio’s input range.

I could use 3, and have a nominal of 12.6V, but that quickly drops to below 10 once I start using them, so the actual use time will be short.

My architecture, after research and testing, shall be: 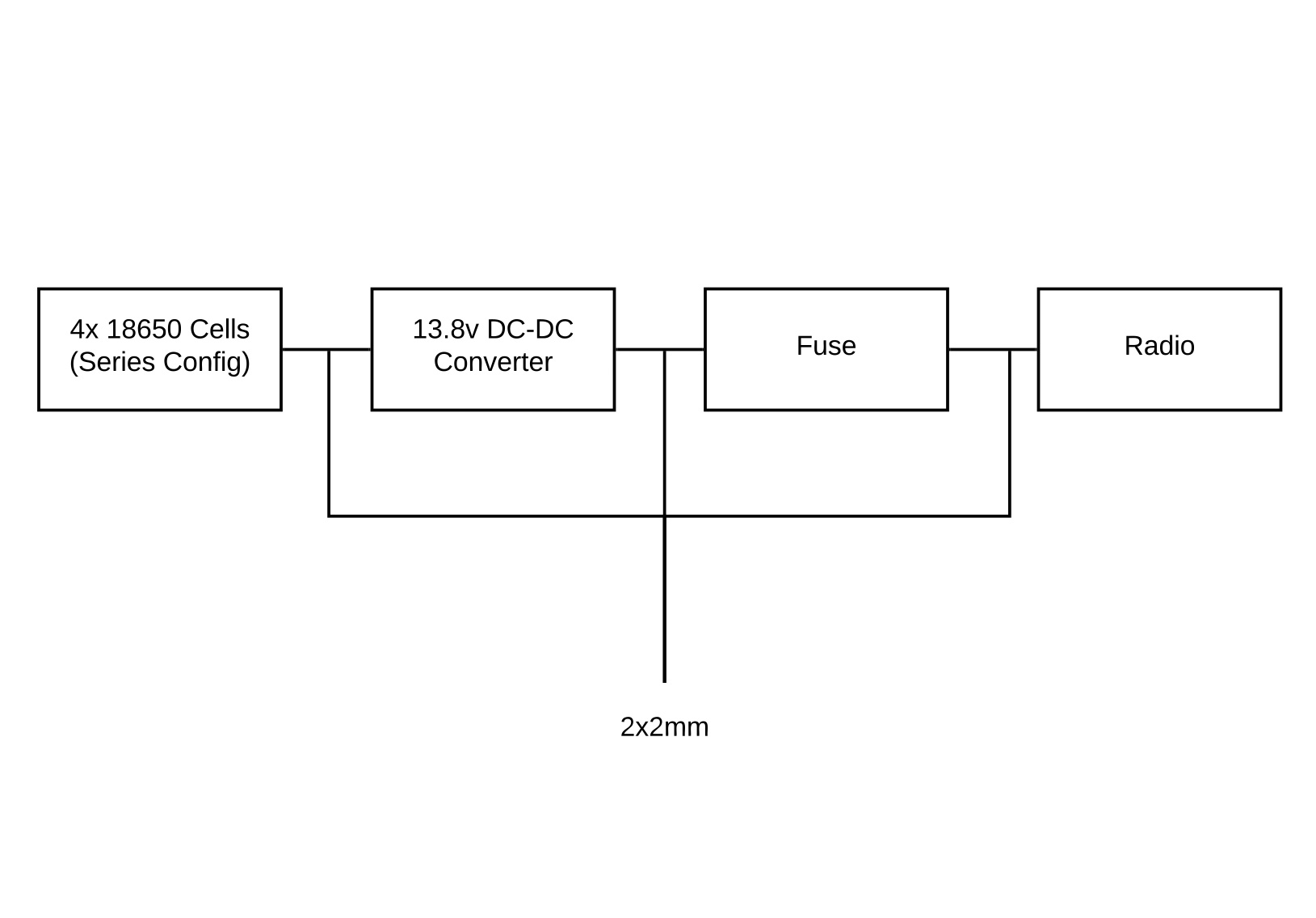 The interconnects will be 2x2mm² wire (red & black), terminated in Anderson Power Pole 30A connectors for neatness and interconnectability with my other radios.

I am anticipating my ebay purchased DC-DC boost-buck converter to be RF noisy - it has a switching frequency of 180kHz. I’m going to have to house it in something that will shield the noise, and maybe add a toroid or other RF reduction method on the input/output wires. This might also help to reduce the ripple in the output power too.

The whole set up shall, for the moment, be limited to 10A output @ 13.8V DC. I doubt I’m going to use all 138W, but it allows for overheads and a little bit of growth upwards if need be.

I’m going to have to limit my power output, and will need to experiment with the radio into a dummy load to learn its power characteristics.

Some bits have arrived!

The battery holder, as you can probably see, has quite weedy wires that i’m going to have to replace for safety’s sake, but that shouldn’t be too big a challenge with a soldering iron!

If this succeeds, and I use it a couple of times, I shall likely purchase more batteries - I could put them in parallel and have more capacity and power output, or I’ll more than likely just carry them and replace the working batteries when they’re done. Given the batteries are £4.50 or so each from Fogstar, it’s a cheap upgrade to double my time on the air!

If it doesn’t succeed and/or I don’t bother to radio in a field, i’ll just recycle them into powering another project!