“The Manufacturing sector comprises establishments engaged in the mechanical, physical, or chemical transformation of materials, substances, or components into new products.

You see it on all sorts of things – three words that the Yanks seem to be crazy for. “Made In America” is seen as a mark for reliability, quality and (perhaps most importantly) pride. Whether that is an actual fact is up for debate, it seems, but the belief still stands!

Before the Second World War, the US economy was almost totally self-sufficient. The damage war did to that is incredible; factories were repurposed and some destroyed, stockpiles of resources were exhausted and funds were left low.  This forced America to look abroad, not only for help to rebuild herself, but to help the allies that she supported – what remained of Europe and Asia. This international spirit quickly turned into optimism and hope for new revenue streams, as often happens in this country. The global company began to appear as this happened – technological advances meant that people, information and cargo could be transported around the globe in a matter of days, not months,  at lower cost than ever before.

Companies opportunistically employed in foreign countries where labour was in the region of cents per hour as opposed to dollars per hour back home. Even considering the costs of shipping back to the US or over to Europe, this was still a huge financial win for companies, and America saw her manufacturing industry rapidly disappear.

This wasn’t a long term trend, however. Despite what we hear from the people that dwell on the internet and other scaremongers, the American manufacturing industry has been growing steadily since 1960, as seen by the industrial production index below. 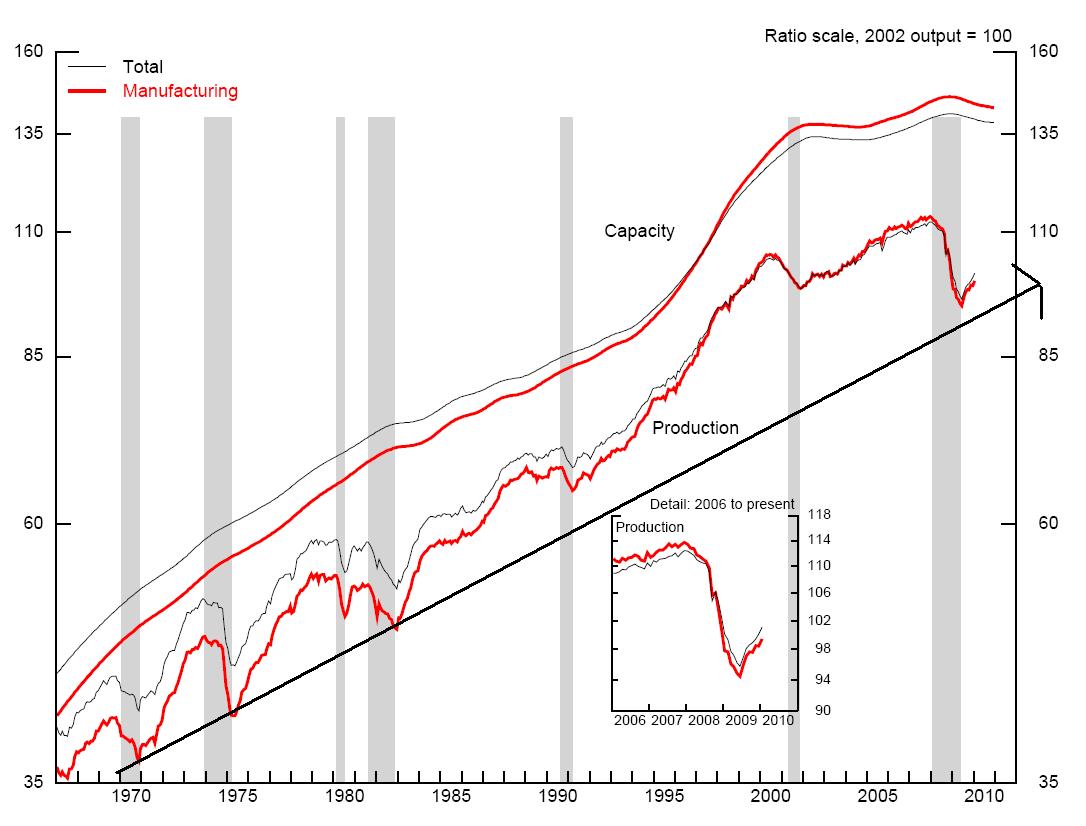 According to the Bureau of Labor Statistics there has been a long term, slow decrease in manufacturing sector employment. This is seen in the UK too, embodied partly in the “Polish Stole Our Jobs” mentaility, or the general belief that labour is being exported to Eastern Europe in favour of the UK because of the lower taxes/wage costs/insert cost-saving-conspiracy here, or that companies are all shutting down as no one’s making any money in the recession. As with anything, there is some measure of truth behind the rumour. Yes – manufacturing jobs in both countries have been exported to cheaper economies elsewhere, but there has also been a change in how retained industries have operated, which has contributed significantly too. Manufacturing is now slowly being reclaimed from the distant economies – with the significant increases seen in shipping eating away at companies’ bottom lines, increasing costs of overseas labour and increasing import and export taxes, it’s becoming less attractive to go to all the hassle of offshoring labour.

There has also been an increase in productivity of manufacturing industries over the last 50 years, contributing to the increase in output. This productivity increase has come with a couple of effects – it has reduced the required workforce size, as each worker in an industry is now used more efficiently, but it has also increased the required skill level for each worker.  Automation has become prevalent in many industries also, again reducing the need for many workers, but increasing the requirement for skilled workers to operate and maintain the production machines.

We see this change in productivity embodied in the ideals of Lean Six Sigma, an approach that is commonly used to manage and improve performance of people, processes and, ultimately, company efficiency, and is something I’ve learned a great deal about out here in GE Aviation Systems.

From what I’ve seen and heard here, the division is currently undergoing a period of big change – having been bought as Smiths Aerospace Division a few years ago, it is now being properly integrated into GE Aviation, and this comes with exciting changes for all involved, however there are still big changes left to be taken to improve company performance. A lot of this change is driven by Lean Six Sigma – there’s plenty of investment to get more “black belts” and “master black belts” into the organisation to drive this change at an increasing pace, and changes are as small as reorganising how a manufacturing cell is operated to how an entire factory’s processes are organised.

The development of US manufacturing, however, isn’t only the domain of huge multinational corporations with a constantly changing mission statement and hundreds of thousands of employees. As the quote I included at the top suggests, it has become recognised that people are becoming interested in setting up their own miniaturised manufacturing locations. With the rise of Maker culture, a mashup of geeks, nerds, computers, arts and crafts, there is a small movement of people making their own things to sell to whomever they please.

I met a man on my excursion to Detroit who said that to him, labelling something as “Made in America” wasn’t the final goal – he wanted to ship out his products as “Made with pride on my kitchen table”. It’s an exaggeration, yes, but the pride of designing and making something yourself isn’t lost on him. For the record, he was a victim of the increase in efficiency at one of the big motor companies, and instead of wasting his time looking for non existant jobs in Detroit, he found refuge in his local hacker space.  He produces models of video game characters that he draws, models on computer and uses a 3d printer to construct. Arguably, losing his job has given him the freedom and ability to meet new people and learn new skills, as well as develop an income stream.

While this isn’t a facility available to everyone, hackerspaces are popping up all around the USA, and around the world too. These community run centres of do-it-yourself manufacturing are just part of a larger movement of people who believe in the same ideals, and are becoming actively encouraged as the US government realises their benefit: More self employed, motivated micro-manufacturing companies contributing to the US economy, and more skilled employees for the new industry growth, and the growth of a sense of community in many areas that perhaps lost that many years ago.

The celebration of this movement of “I can do it” (as DIY almost never works) can be seen in my experiences at the Maker Faire in Detroit, as seen in my Kindness of Strangers blog.. The guys who built that giant dragon must have developed some impressive skills that will no doubt be well used by some company, or by themselves as independent metalworkers, mechanics and more. Maybe the folk that made the human-sized Mousetrap game would have a good chance in there too. What about the man who holds the patent on a new, more efficient variety of the rotary engine (that’s not the famous Wankel) – he designed it on his kitchen table.  It’s not just people being geeks and making cool things, it’s a significant celebration of America’s creativity, resourcefulness and capability. Oh, and there are some geeks making cool things too.

I guess after all that, there’s really one thing that I’ve learned from this weekend, and the research I did into manufacturing afterwards.

Being a geek doesn’t mean sitting in front of a computer. In fact, if that’s all you do, you’re really disadvantaging yourself.  Get out there and play.

It’s kind of a good mantra for life, I guess.