Tom and I were happy to announce the first 57N Stupid Shit No One Needs Hackathon last week. I maintain he forced me to send the email, but I kind of enjoyed adding my stuff to it.

It turned out to be a really cool weekend of creating for the sake of creating, which I’ve not done for aaaaaaages.

I wanted to make a BBS door game to tie into my mysterious BBS project, so I made FuelSim - the dynamic, exciting game which places you into the mysterious, unexplored world of an Andorran fuel station.

What is Captain Rondo’s past? Why is a retired pirate running a fuel station in Andorra? Will we ever find out?

FuelSim was written in python, with curses providing the excellent user interface: 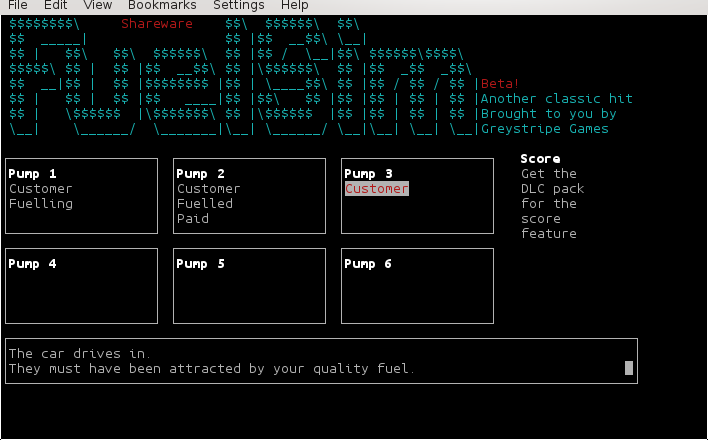 The code is BSD 3 clause and available at gitlab (Never look at the code, it’s terrible) (No, really - it’s awful. I’m not a programmer, remember?). Play it, have a laugh, forget it existed.

The game’s logic is pretty simple. Roll a dice, if the value is greater than a preset threshold, the “customer” “comes in” to the first available “pump” and over the next 3 turns goes through a series of actions which require user input in the form of “push butan to advance”.

Gameplay isn’t compelling, this I will admit.

I hit a couple of snags along the way, which I’ll document as I’d like to understand them later.

I can’t remember anything else for the moment, but I’m sure I’ll come up with some other stuff.

Easy issues to fix are

If I can work out my niggling issues, I might expand it or I might not. I’m tempted to rewrite the core game code and actually turn it into a BBS door with a leaderboard - Synchronet should be able to execute the python, but it wasn’t setting $TERM to something curses liked. ANSI should do it nicely!

The other projects were great:

Let’s do it again next year.