Life Inside a CFC Sig

This was originally posted when I worked for Crossing Zebras under the name Hibbie as an internet spaceship columnist. It’s here for completeness of my writing.

In large organisations it’s really easy to get lost. When there are thousands of people surrounding you, all talking constant shit, it’s difficult to see regular faces and make strong connections with anyone.

EVE, at its core, is a social experience, and without friends the game is lonely, difficult to learn, and nearly impossible to succeed at. With this in mind, Goonfleet introduced Squadrons in 2006 – a method of subdividing the member base into smaller groups in order to give newbies and veterans an anchor within the corp.

Now, of course, Goonfleet has given way to Goonswarm Federation and begat the CFC, but we’ve kept the subdivisions, even if we’ve renamed them Special Interest Groups (SIG). They provide a way to make connections with people, grow your own interests within a large group of people, and make the whole experience much, much easier to digest. SIG’s are a rarely talked about secret outside the organisation, but they’re core to our continued success for a range of reasons:

Every major SIG has it’s own feature that draws people. European Goonion are known for being Mr Vee’s slick, efficient killing machines, with honed doctrines and a fast response time. Top Goon like camping in cloakies, scamming people and congratulating one another for being in the danger zone. Miniluv are our valued highsec arm, liberating freighters of their structural integrity and reaping the rewards of people’s stupidity. Freedom Squad are currently being rebooted with a hilarious Latin Dictator gimmick… The list goes on, and one of them is my own project, which I’m obviously the most informed and excited about. 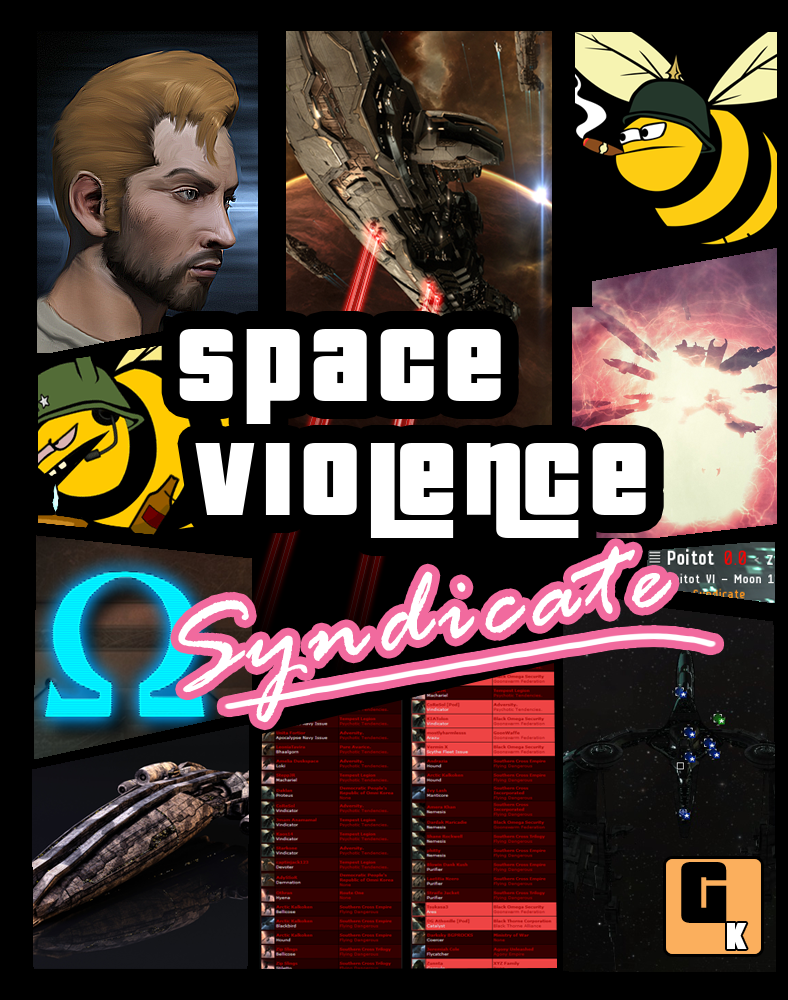 Space Violence, as a SIG, operate from Syndicate, and we have done for a long, long time. We specialise in small to medium gang warfare and are known within GSF for constantly having our members be most of the pilots on the top ten reimbursement list – I’m sure our members from other alliances hold similar positions. We love to welp. It’s in our blood. SV has defined my time within the CFC, and I’ve grown from F1-pushing, “point or scram?”-asking, mostly confused idiot to, well, more or less the same but with a star beside my name in Jabber. It has become nothing short of the main reason I log in and discuss EVE every single day. I thoroughly enjoy my daily activities in the group – the leadership work, talking with the guys on comms, being on fleets and sometimes even leading fleets. I spend my week looking forward to our gin-fuelled Friday evening sloshop, hungover hangouts on Saturdays and occasionally sharing the now infamous Hibbie stories. Within the group I’ve learned to PVP more thoroughly than I would have from large fleet engagements. When there’s 30 of you on a field, individual pilot ability and understanding is vital.

Gone are my days of flying straight at the baddies – they take you off the field far, far too quickly for you to be of any use to your fleetmates. No longer do I split my guns to whore on killmails, because apparently killboard padding like this is bad, wrong and frowned upon. Modules are mapped, keyboard shortcuts are memorised – every second counts, every missed reaction could cause disaster.

I’ve learned fleet discipline, taken fleets out, jumped in emergency shield triage and, on the whole, become less bitter and retired from EVE (although some of my colleagues may dispute that claim).

Separate from the coalition, we have our own doctrines, reimbursement program, goals, rivalries and deployments. This takes time, effort and careful collaboration with others in our leadership group to plan and shape – herding cats is no easy task.

I’ve made great friends from across the CFC, as have our line members. These friendships have developed into relationships between groups – we’ll do favours for an ally, and they’ve got our back when we’re in trouble. We consider their doctrines and they comment on ours. Every so often, when we need backup from other SIG’s, alliances, or strategic operations, the opportunity arises to dip my toes in the coalition-level leadership tasks.

These events are exciting to be part of, even if you all want to call them ‘blobbing’. The logistical coordination of hundreds or thousands of nerds in spaceships of varying expense is an art form, beautiful to watch in motion. It’s even better when I’m not being shouted at for being useless. For me, it’s a window into how the “responsible adults” run things outside of our little playground. I can only hope the exposure and contact helps us as leaders run better deployments, events and evenings for our members.

We have a strong, well defined subculture running deep within the squad, not dissimilar to what you’d find in a corporation or possibly an alliance. From the get-go, we indoctrinate our members with a mindset of ‘we take the fight’. This comfort in fighting outnumbered and outgunned is vital to our success – we love watching ships explode, be it our own or our enemies.

Our members have a desire to go in far over their heads – there’s an unrivalled excitement at being taken out on babby’s first fleet as they try to learn the game, how to fly and how to command all at once. Hilarious killmails and lossmails are generated, and at some point along the way, someone’s going to have told a story that will keep everyone talking for days.

We’ve never tired of doing this, and it’s unlikely we will be anytime soon. A large part of our culture is to have a healthy, active community on Jabber – I feel like I spend 20 hours a day there. We discuss all kinds of things, ranging from the next great fit that’s going to be taken out, to just what level of crazy someone has stuck his dick in this week.

There are ongoing lessons about industry, tackling, bling hotdrop fits and ganking, as I watch the stream of consciousness pass me by currently. For some people, their only contact with the SIG is sharing and discussing hilarious killmails on jabber.

These guys might not be in Syndicate with us, but they share our passion, interest and enthusiasm. They have no less of a place in our hearts and SIG and we welcome them with open arms. It’s fantastic to see the membership embrace our community and culture so wholly. We’ve had songs written about SV and are currently annoying everyone on the GSF forums with our GTA gimmick signatures and pictures (SV: CFC’s #1 GTA/WOW RP SIG).

Most recently we’ve had an amazing Alliance Tournament ad made for us, which we’re all really, really excited to see played. Hopefully by leaving our home system name in the clear, someone will take the hint that we like to shoot people and rarely use Ishtars.

Where we call Home

Syndicate, if you’ve never been, is a wonderful place to live. We have decided that sovereignty is overrated, and rightly so! Down with Sov!

The neighbours aren’t ratters we can’t shoot like in Deklein. Our relationship with the region and it’s inhabitants is dynamic and volatile, which makes for an exciting way to play. There is constant backroom discussion with leaders of other alliances and corporations, and friendship with the regular, sometimes skilled ‘neutral’ players we come across.

For example: Until their recent move, we worked with Brave, guiding and advising their leadership to ensure they had stable sources of income, meanwhile working our hardest to ensure they had a solid way to spend it as SRP against us.

Sadly, there are groups we’ve never got on with. I’m not sure how much EV0KE have appreciated being curbstomped over the years, but for some perverse reason they keep coming back for more. Likewise, the Iberians – brave residents of PF-349 – are very good at disappearing from view the minute you appear with guns, but from their pos shields, they’re very loud.

On the slow days though, we can always rely on EVE Uni or CAS to fight, welp and reship, and they can rely on us for the same. The best thing about Syndicate, though, is the low barrier of entry.

Any new corp wanting to learn PVP can come out here and find something, or someone, to hit. There’s no need to worry about having supercap superiority to hold a system – a willingness fight and a desire to learn and understand are all that is required.

If you base from there and fight, it becomes known as ‘your’ system. We’ll learn what you like to fight with, and try to find an interesting counter for you. If you’re in the CFC, come play with us and try something new. Everyone else, I urge you to bring some friends and ships out and try Syndicate.

Don’t worry about the station being flipped, meeting the legendary blob or struggling to get a good fight. At worst, you’ll meet new people, have fun and lose some ships. When our fleets meet, I swear on my honour as a member of the Most Illustrious Goonswarm Federation we’ll play nice. If nothing else, we’ll take the fight.