This was a pretty quiet pass, with 6 stations being heard.

So, all in all we heard Germany (DG4BR DG3LA), Italy (IK3ZGB), Hungary (HA3HT), Spain (EA1JM) and England (G0GOO). Some familiar callsigns beginning to pop up. Transmission and Reception wasn’t the clearest - I’ll have to update the Keplarian Elements (see the bottom for more) by the looks of it. Interestingly, for me anyway, is that I can actually hear when the system isn’t going to be able to decode a packet, and there were quite a few of those moments, so I think that means I’ll need to look at the Elements. Will try again tomorrow with new ones and see if the quality increases and as such, reception improves. Another thing that’s worth taking away as a valuable lesson from playing with the ISS. 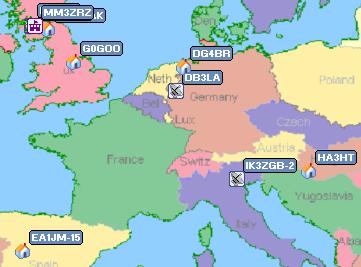 Keplarian Elements are defined as the standard mathematical model that describes the orbit of a spacecraft. In real English, they’re a bunch of numbers I download from here, the system does some maths and it tells us where and when a satellite will be overhead. They have a limited timespan - they can only predict the pass for a few days as the model isn’t 100% perfect, and it appears that these 5 day old ones might be a bit past their best. By updating them regularly, we keep the chances of us making contact with a spacecraft much higher, and the quality of the communications will improve as a result!