This pass started off quiet but got busier towards the end, as the ISS passed over the more Eastern European countries. The APRS software, AGWTracker, had some difficulty as not all station include their Latitude and Longitude data in the packets I was hearing. Also, updating the Keps was a good plan - everything was much clearer, even after our tracking software (currently Nova for Windows) said the ISS was out of range!

In total, we heard, recognised and placed 11 stations (ordered in terms of distance, starting with us):

However, there are at least 3 I know of that haven’t come up in this list due to me not receiving their positional data - UT4QU from Ukraine, 9A2RI from Croatia, F4FHY from France and OM3FH from the Slovak Republic. 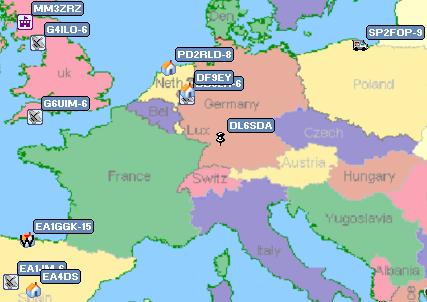 Messages were sent and received to/from G4ILO and EA1JM!

All in all, a pretty good pass!